Our first Garden - the Highlight of 2020

We started this year with the goal to grow our first garden.  Primarily, we simply wanted the experience of growing a garden.  Secondly, the nearest grocery store is at least a 20 minute drive and we wanted the ability to be somewhat sustainable on our own.  And admittedly, I had the ambitious and enthusiastic goal of having "the most beautiful garden in all of West Virginia."  (Imagine me saying that in my giddy, girly, high-pitched voice and then imagine the way Ronnie looked at me when I said it.)  Turns out, just keeping the damn garden alive was enough to keep us busy all summer. 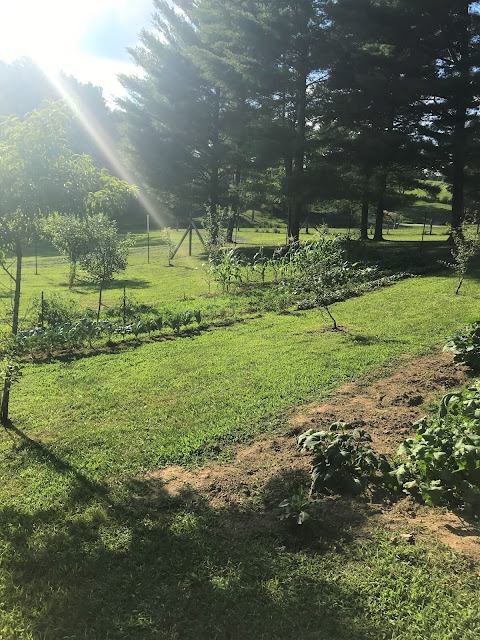 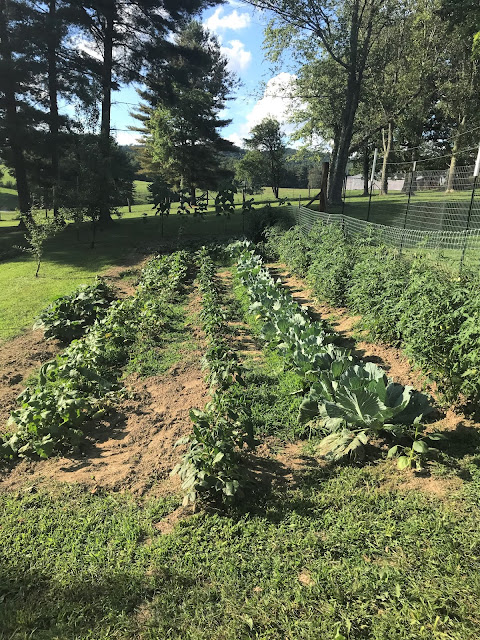 So, we started our garden in March by planting seeds and growing starts indoors until Spring when we could plant them in the garden.  Initially, we kept them in three tubs and Ronnie fixed a lighting mechanism to mimic sunlight.  As they started growing, we got super excited and by Spring, we had what seemed like a jungle in our house as we had added more plants and those plants were lined in every windowsill of our house.  First lesson learned, we won't ever do that again.  Next year, we'll have a greenhouse.  And, we'll more than likely sow more seeds directly in the garden in spring. 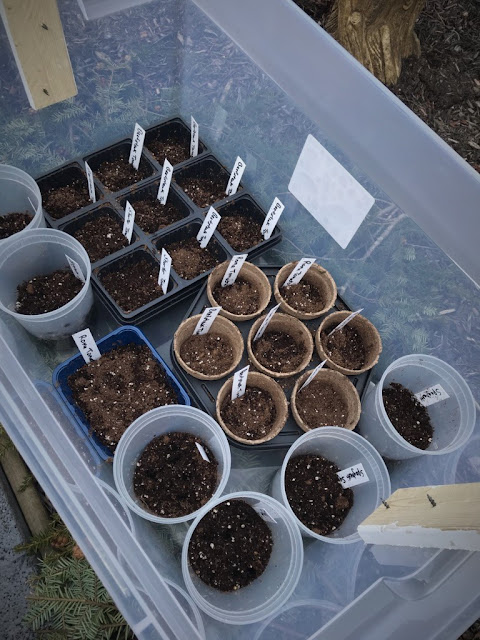 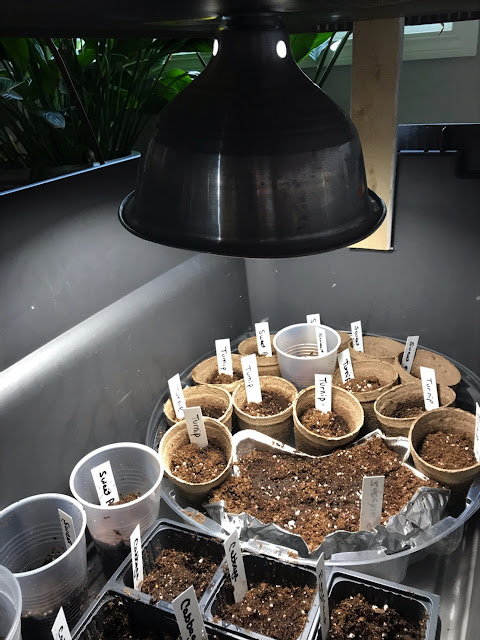 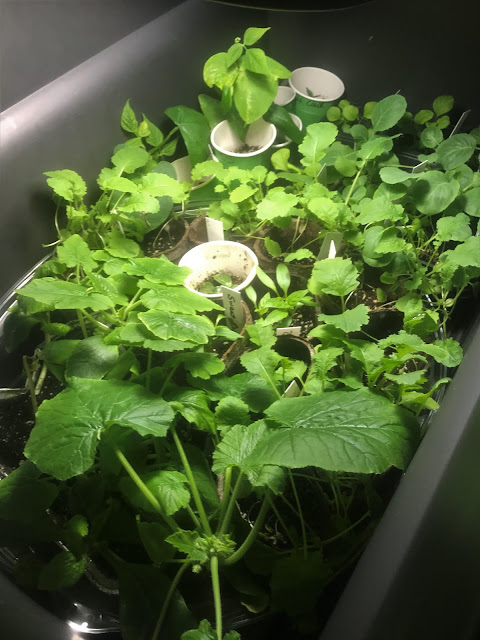 Before tilling the soil for our garden, we knew we would have to protect it from the deer.  So, Ronnie  constructed an 8 foot fence to protect our garden and orchard.  Said orchard didn't bear a single fruit this year as we had a very late frost in the spring.  But, everything worked out and we're happy to report that not a single deer jumped the fence.  Can't say the same thing for keeping groundhogs, squirrels, rabbits and other wildlife out of the garden. 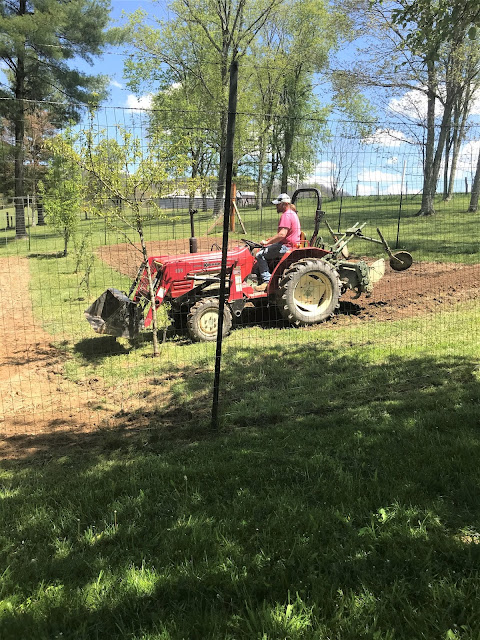 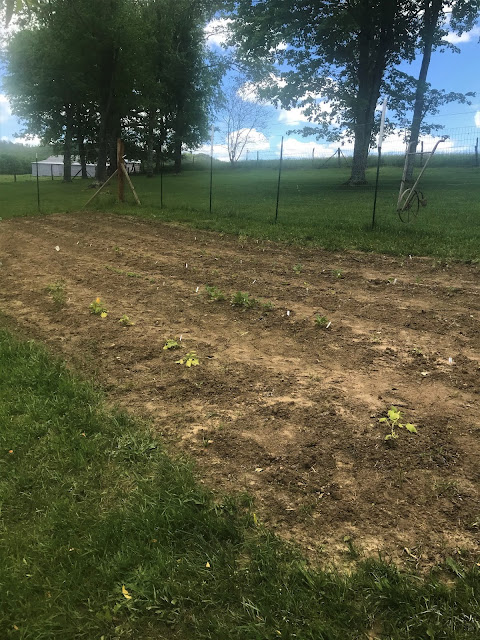 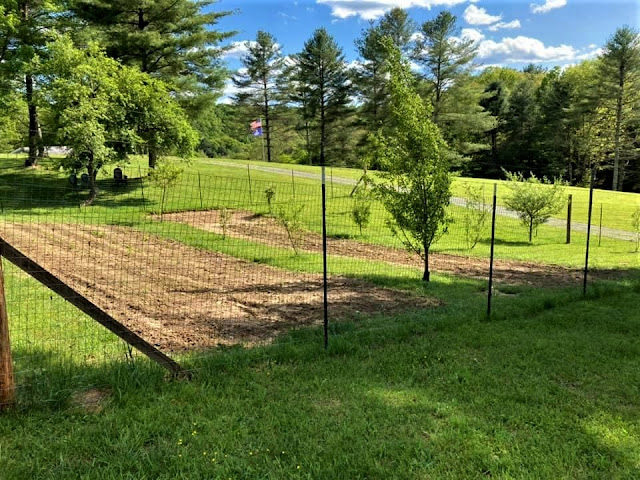 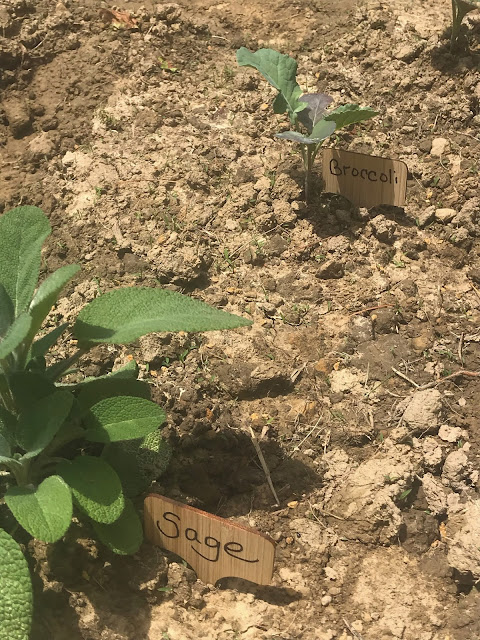 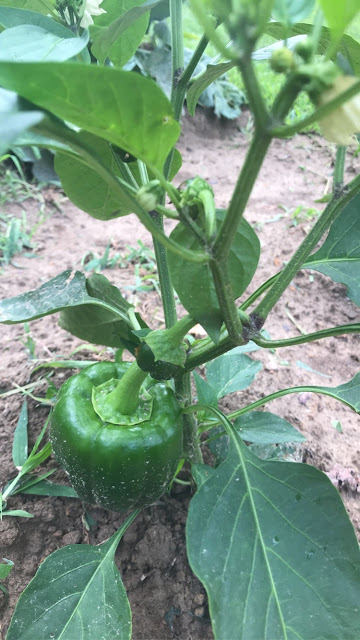 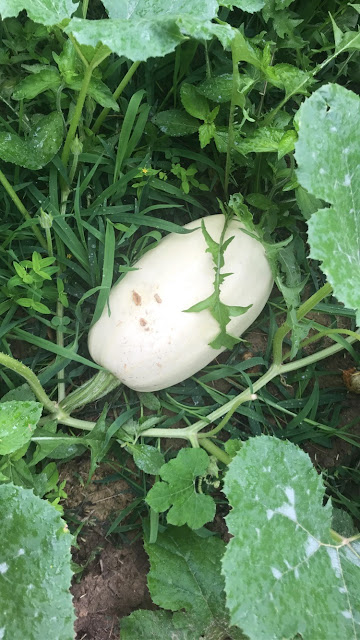 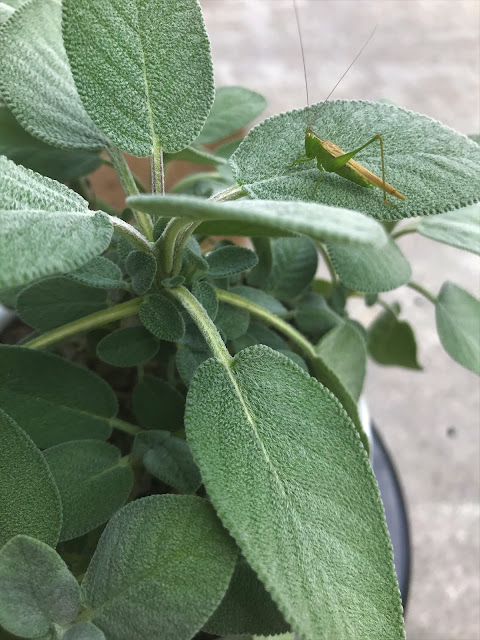 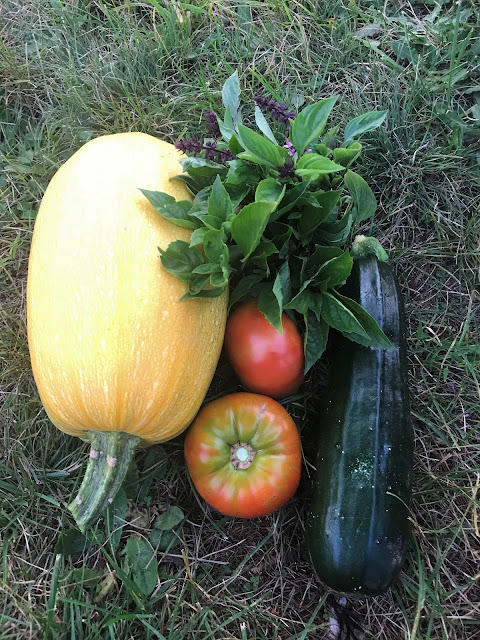 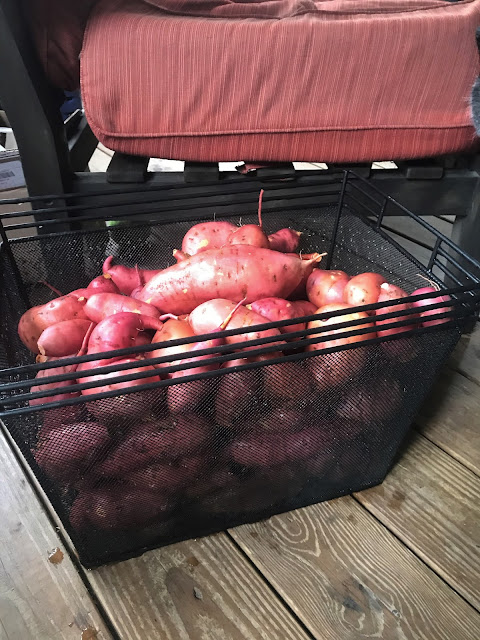 So, what did we learn this year?  Lots of things!  Our garden was not pristine and perfect. But, it was ours.  Lots of things thrived and some things died.  But, we took everything that happened with the garden in good stride.  "Its our first garden, we'll do this or that differently next year," we'd say.  And for our first garden, it really was a good one.  For the most part, we ate everything that we planted.  We had lots of veggies left over to keep for the winter.  And we did a small bit of canning and freezing other vegetables. 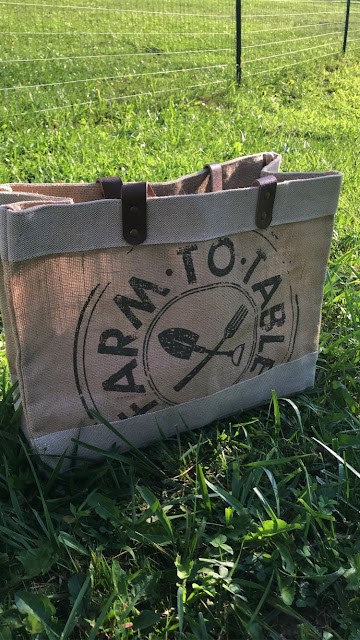 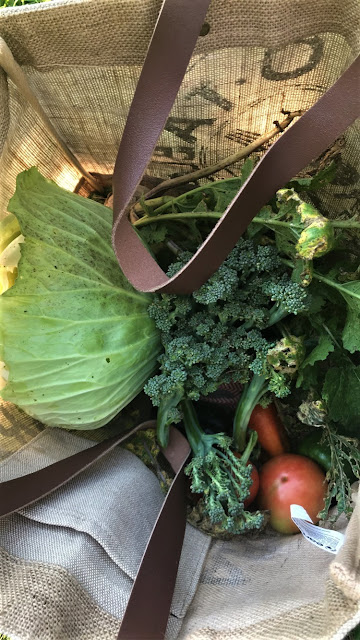 The best part of my summer days were going to the garden to harvest something for dinner.  It just doesn't get any better than that.  Also, after spending a day in the garden and getting dirty, there's nothing I enjoyed more than having a glass of wine and sitting quietly in the garden to just take it all in.  Another joy that I got from the garden this year was simply taking off my shoes and working in the garden barefoot.  It was so grounding and calming for me. 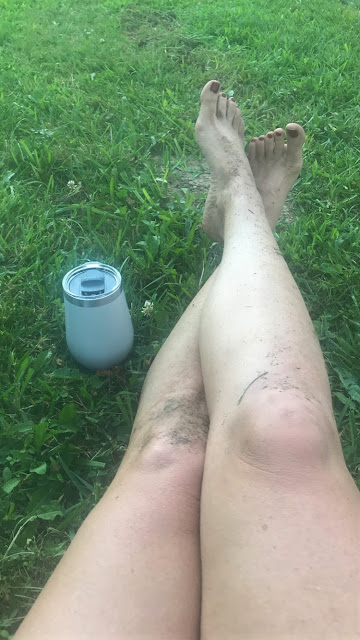 We'll definitely plant more of certain vegetables and less of others.  We'll do our spacing between plants a little different next year.  We started a compost bin this year but it won't be ready until next Spring.  We probably need to supplement the garden with manure.  I'll leave Ronnie to that task - our  neighbors have plenty.
Ronnie's grandfather has passed down heirloom dahlias to us since we've been here on the farm.  So, every Spring, it's something we do together, and we plant our dahlia tubers with great anticipation for the beautiful flowers they produce.  Having fresh flowers in the house brings me lots of happiness, and it just doesn't get better than dahlias for fresh cut flower arrangements.  I was also insistent on growing sunflowers in the garden this year.  I planted mammoth sunflowers and they did not disappoint. 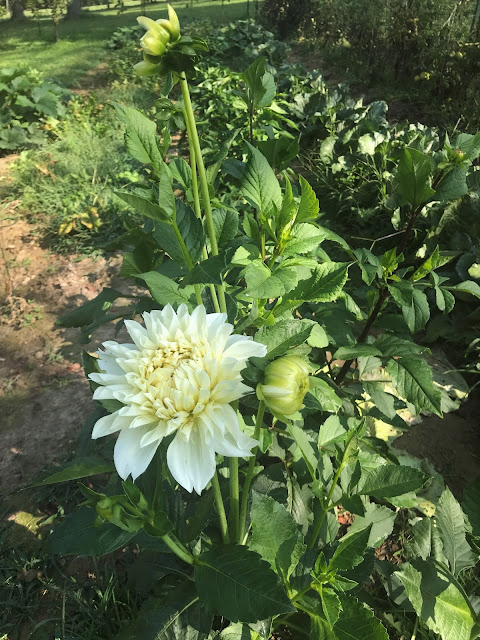 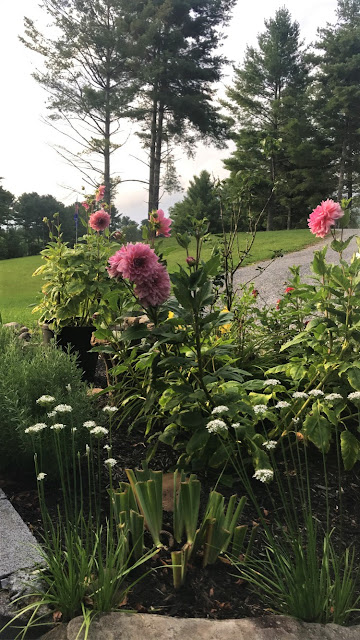 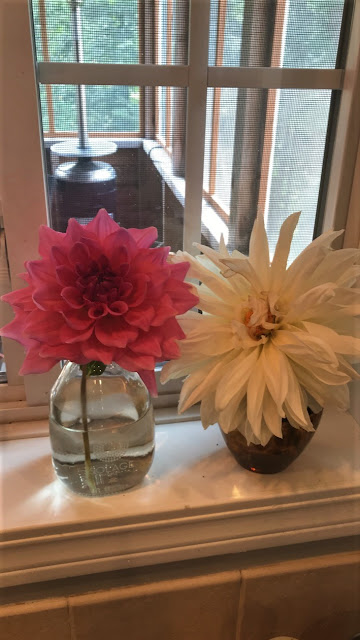 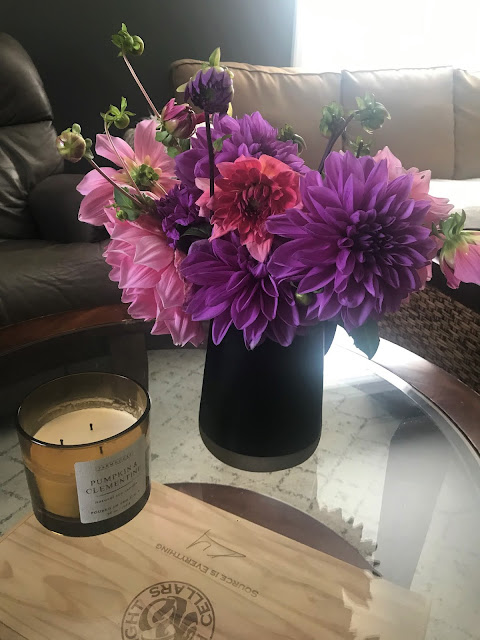 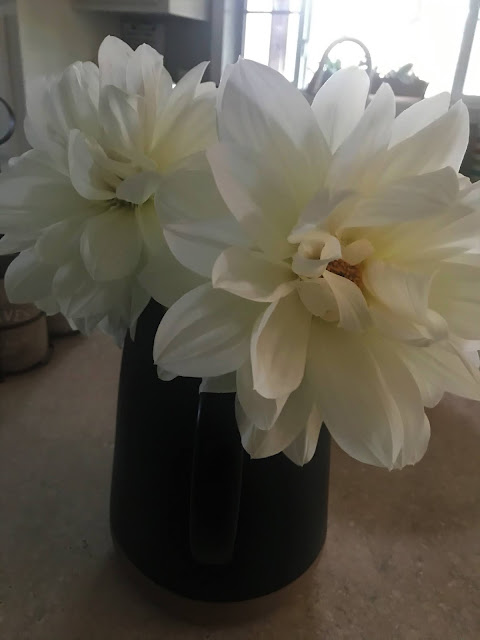 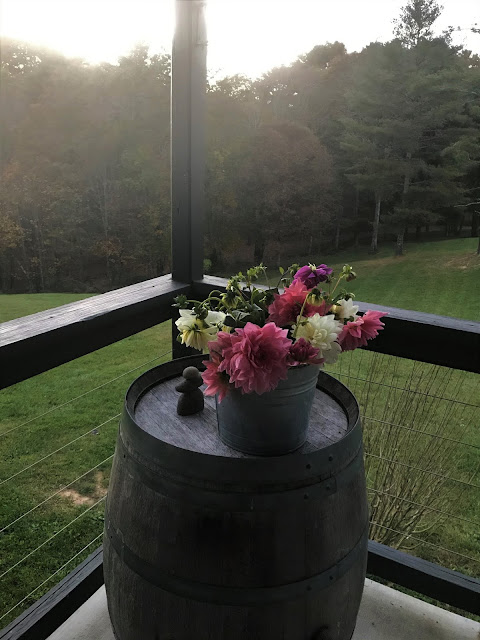 I would encourage anyone that can, grow something.  It is a beautiful, humbling experience.  It feeds you, it nourishes your soul, and brings an immense amount of joy.  All the things we needed, this year in particular. 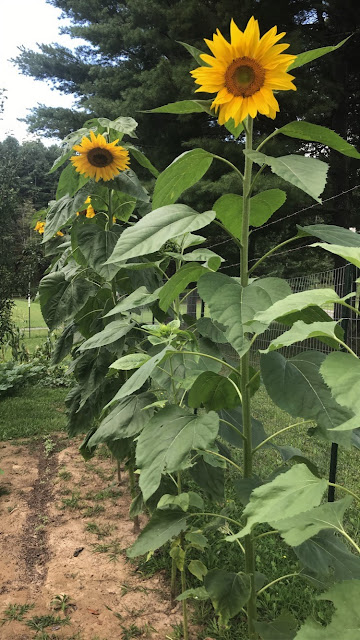 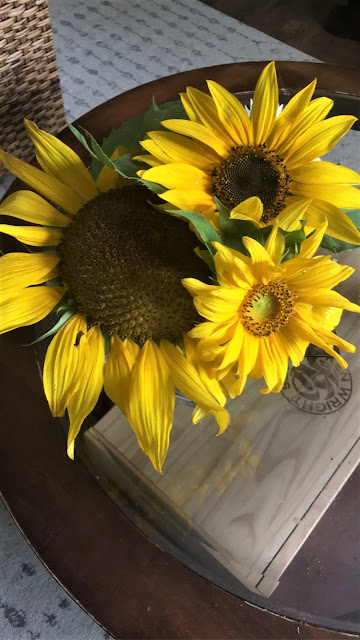