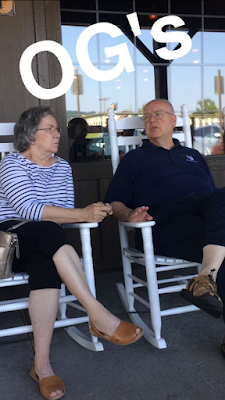 Let me tell you a story about my Mom and Dad.  I’m sitting around one day drinking some wine – the day that my Dad came home from a 5 day hospitalization for bronchitis.  And all of a sudden, I realize that I haven’t been crazy worried about my Dad this week.  Not that I didn’t care.  I did.  I called and talked to him every day.  I got a blow by blow from him on what medicine he had taken, the bowel movements he’d had, and the Doctors prognosis and how they came to that conclusion based on these tests that they performed and an update on his latest roommate and what condition he was in and that he had overheard the nurse asking this interesting fella about where he was from . . . (and on and on and on . . . )

and I chit-chatted with Mom as she ran errands in her cute little car and her cute little outfit and “Wouldn’t it be nice to get a coke on ice?”, and “I have to get my hearing aid checked when I leave here”, and “Did you know Madison is still running a fever”, and “How’s Riley doing since his vet appt yesterday?” . . . . (and I got regular updates from Mom on how they were both doing.)

Read more »
Posted by Our Boozy Life at 7:43 PM No comments: